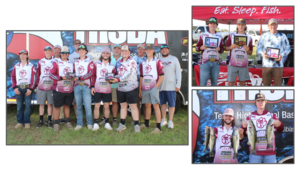 
Ten of these anglers qualified for the THSBA State Tournament to be held at Lake Belton on May 14 & 15.